Switzerland and Germany Advance to the Final of the WWC 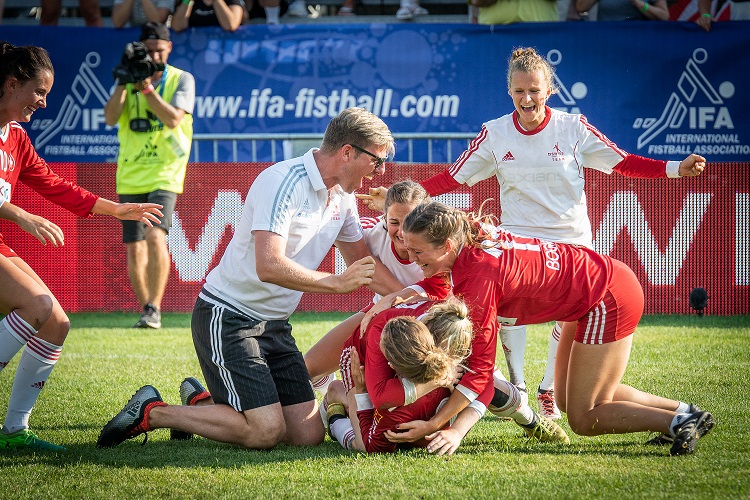 In front of their home crowd, host Austria aimed to reach the World Championship final for the third time in their semi-final match against Switzerland. The spectators witnessed a highly exciting game in which the Swiss team took the lead in sets twice. The game stayed open until mid of the fifth set when the Swiss team pulled ahead and sealed the deal with an 11:6 set win. Switzerland has thus qualified for tomorrow’s final, it is their third participation in a final after 1998 and 2002, respectively. “The atmosphere here is simply fantastic. It goes without saying that the majority of the audience rooted for Austria, but here are, however, many Swiss fans who came especially for us. Their cheering helped us a lot. The matches are tough and we are over the moon right now”, said Swiss defender Katrin Lüchinger. Austria’s Jana Pinsker analyzed the loss of her team, “We fought our way back numerous times, but made many unforced mistakes. We didn’t manage to be as consequent as we usually are.”

In a re-match of the 2016 final, defending champion Germany and Brazil played for the second final spot in the 2018 Women’s World Championship. The fans in the ÖBV arena, on TV and livestream witnessed again a fantastic fistball match at the highest level with long rallies and great saves. Both teams were evenly matched with Germany taking the lead in sets twice. Each time Brazil bounced back and equalized. The game thus went into the fifth set in which the German team eventually narrowly kept the upper hand. “It was an unbelievable game and we are very happy to have again qualified for the final. We now need to regenerate so that we can go fully fit into the final against Switzerland”, said German attacker Stephanie Dannecker after the game. “We discussed tactics beforehand, but could not stick to it for the entire match. I am really proud of my defense, they played really good. Our key player was, of course, Tatiane [Schneider], who, unfortunately, did not have her best day. That happens. We are looking forward to tomorrow. Congratulations to Germany”, said Sergio Muller, Brazil’s assistant coach. His team will play for the Bronze medal in tomorrow’s match against host Austria.

In addition to the two semi-final games, we also witnessed the match for the seventh place in the tournament between Italy and Serbia. While the newcomers from Serbia kept in reach in all three sets, the more experienced Italian side kept the upper hand and took the seventh place. In the last set, the Serbian team was on the brink of winning the set, and thus demonstrated again their potential for the future.

Argentina and Poland lost their quarter-final matches against Switzerland and Brazil, respectively. They are thus playing for the fifth place in the tournament tomorrow.

The final-day matches start tomorrow at 1 pm (CEST). The final between Germany and Switzerland will be played at 6 pm. ORF Sport + will already broadcast from 3:50 pm the Bronze medal match between Austria and Brazil.